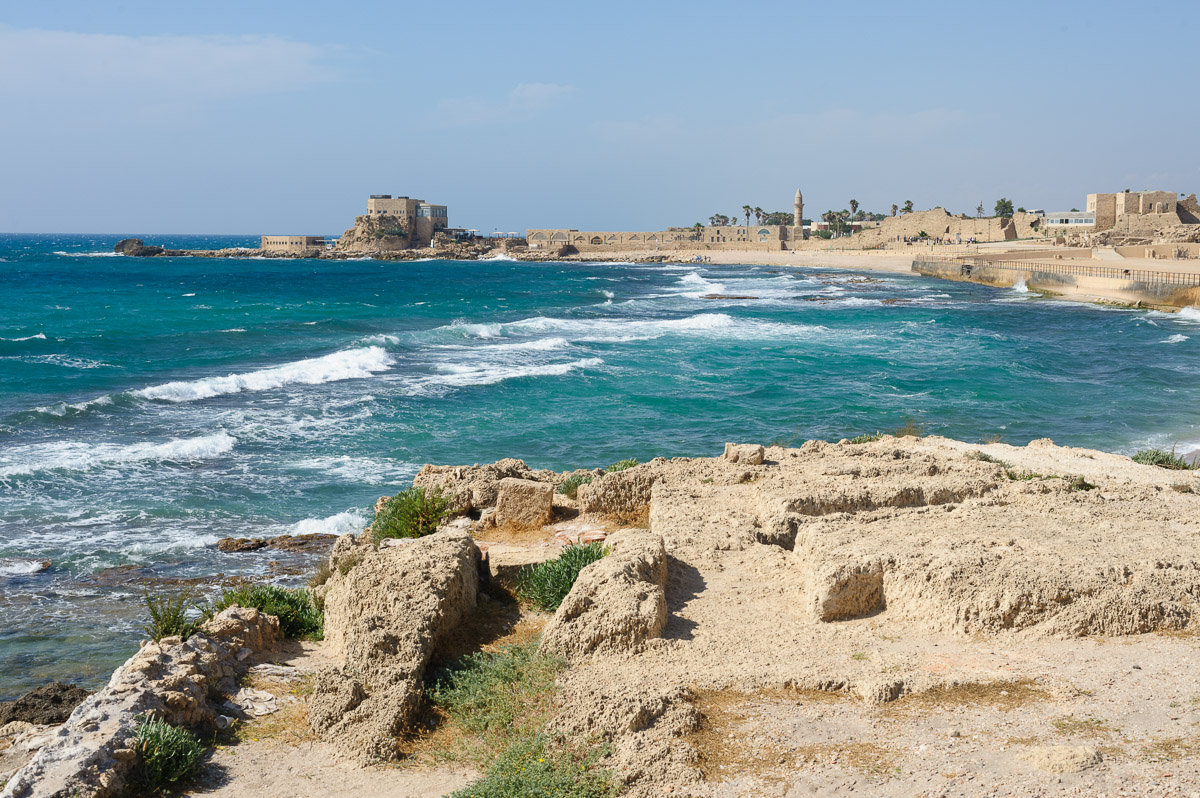 Located along the Mediterranean shore on the site of an ancient Phoenician and Greek trade post known as Strato’s Tower, Caesarea was built by Herod the Great in the late 1st century BCE, in honor of his patron Augustus Caesar. With the largest harbor on the eastern Mediterranean coast, it soon became one of the most important cities in the Roman empire. Ships were laden with incense, spices, dates, and other treasures to sail to Rome and other cities.

In the year 6 CE Caesarea became the seat of the Roman prefects and procurators of the province of Judea. Among the prefects residing in Caesarea was Pontius Pilate, who ordered the crucifixion of Jesus. One incidence involving Pilate is related in Josephus Flavius’ history “The Wars of the Jews”:

Now Pilate, who was sent as procurator into Judea by Tiberius, sent by night those images of Caesar that are called ensigns into Jerusalem. This excited a great tumult among the Jews when it was day; for those that were near them were astonished at the sight of them, as indications that their laws were trodden under foot; for those laws do not permit any sort of image to be brought into the city. Nay, besides the indignation which the citizens had themselves at this procedure, a vast number of people came running out of the country. These came zealously to Pilate to Caesarea, and besought him to carry those ensigns out of Jerusalem, and to preserve them their ancient laws inviolable; but upon Pilate’s denial of their request, they fell down prostrate upon the ground, and continued immovable in that posture for five days and as many nights.

On the next day Pilate sat upon his tribunal, in the open market-place, and called to him the multitude, as desirous to give them an answer; and then gave a signal to the soldiers, that they should all by agreement at once encompass the Jews with their weapons; so the band of soldiers stood round about the Jews in three ranks. The Jews were under the utmost consternation at that unexpected sight. Pilate also said to them that they should be cut in pieces, unless they would admit of Caesar’s images, and gave intimation to the soldiers to draw their naked swords. Hereupon the Jews, as it were at one signal, fell down in vast numbers together, and exposed their necks bare, and cried out that they were sooner ready to be slain, than that their law should be transgressed. Hereupon Pilate was greatly surprised at their prodigious superstition, and gave order that the ensigns should be presently carried out of Jerusalem. 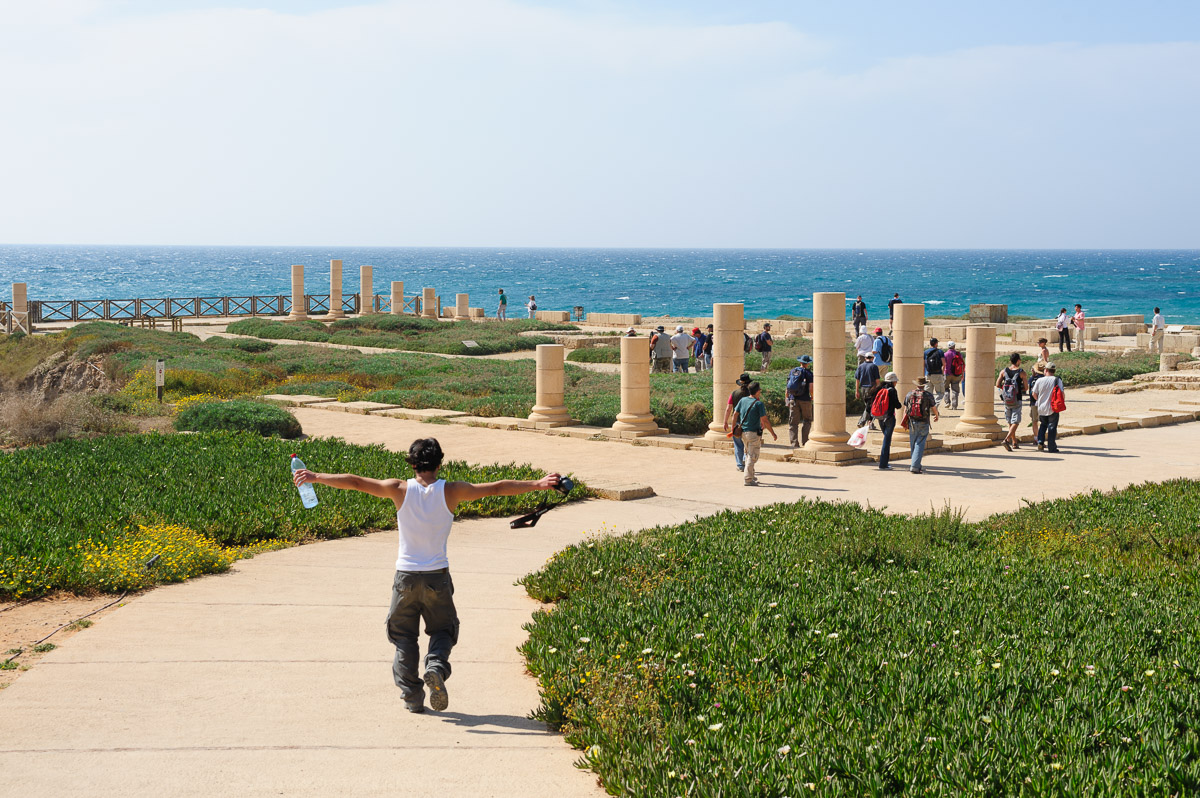 In his treatise “On the embassy to Gaius“, Philo, a contemporary Jewish philosopher, describes the particulars of Pontius Pilates government:

… his corruption, and his acts of insolence, and his rapine, and his habit of insulting people, and his cruelty, and his continual murders of people untried and uncondemned, and his never ending, and gratuitous, and most grievous inhumanity.

Caesarea plays an important role in early Christianity. Here Peter the apostle baptized the Roman centurion Cornelius (Acts 10:1-5, 25-28). From Caesarea Paul set sail for his journeys in the eastern Mediterranean, and it was here where he was imprisoned for two years and then sent to Rome for trial (Acts 23:23-24). 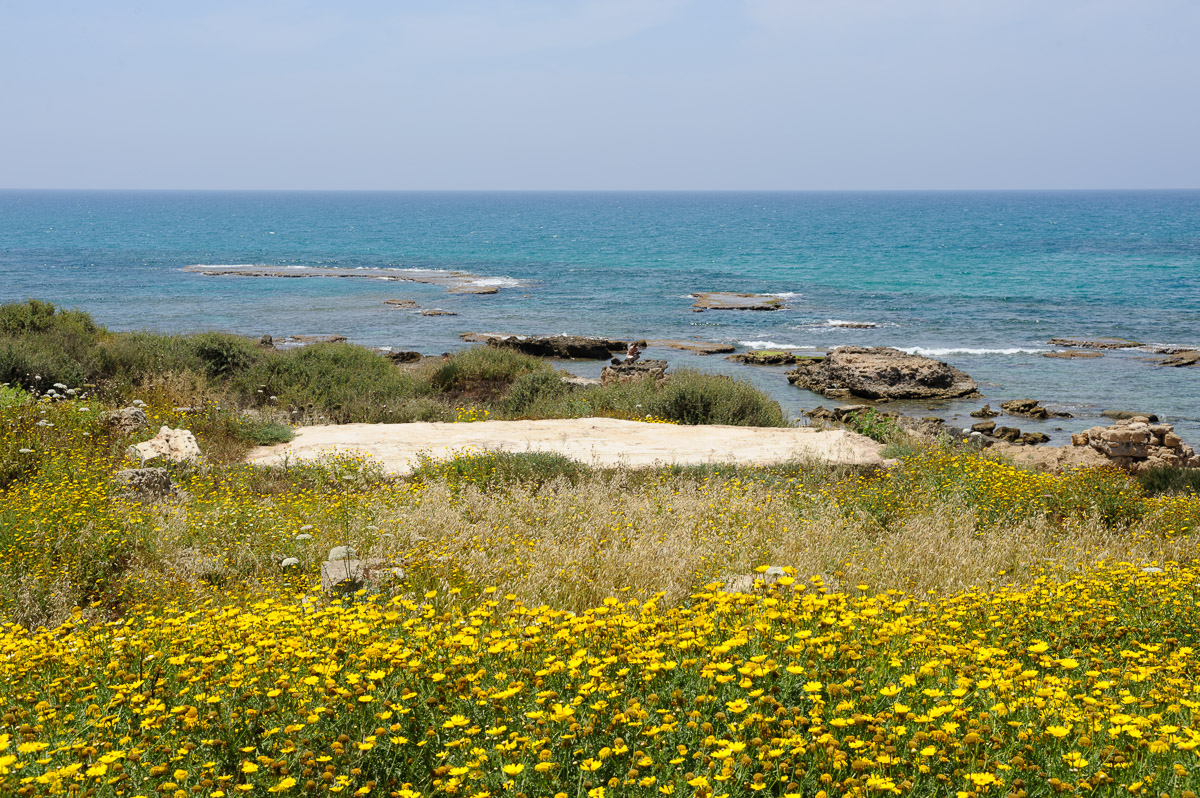 According to Josephus Flavius, events in Caesarea triggered the Great Jewish Revolt against the Romans (67-70 CE):

Now on the next day, which was the seventh day of the week, when the Jews were crowding apace to their synagogue, a certain man of Cesarea, of a seditious temper, got an earthen vessel, and set it with the bottom upward, at the entrance of that synagogue, and sacrificed birds. This thing provoked the Jews to an incurable degree, because their laws were affronted, and the place was polluted. Whereupon the sober and moderate part of the Jews thought it proper to have recourse to their governors again, while the seditious part, and such as were in the fervor of their youth, were vehemently inflamed to fight.

After the destruction of Jerusalem in 70 CE, Caesarea became the provincial capital of the Judaea province. During the Roman and Byzantine periods it continued to flourish as a major maritime city, until the Muslim conquest. Later during the Crusader period it regained some of its fame and glory. The crusaders also rebuilt and refortified the city, and some of the crusader architecture, city wall, and the moat have been restored. After a short-lasting Muslim conquest by Saladin, Caesarea was held in Christian hands until it fell to the Mamluk sultan Baibars in 1265 CE, who razed the city’s fortifications.

Today the archaeological park displays a wealth of Roman, Byzantine, Muslim, and Crusader architecture and artifacts, blended in with attractive cafes and restaurants inside the Crusader city.

The Roman theater, built by Herod, is the first of its kind in this country. An inscription mentioning Pontius Pilate was found during its excavation, a copy of which is displayed.

Herods palace was built on a promontory stretching out into the sea. Later it became the residence of the Roman procurators and governors ruling over the province. 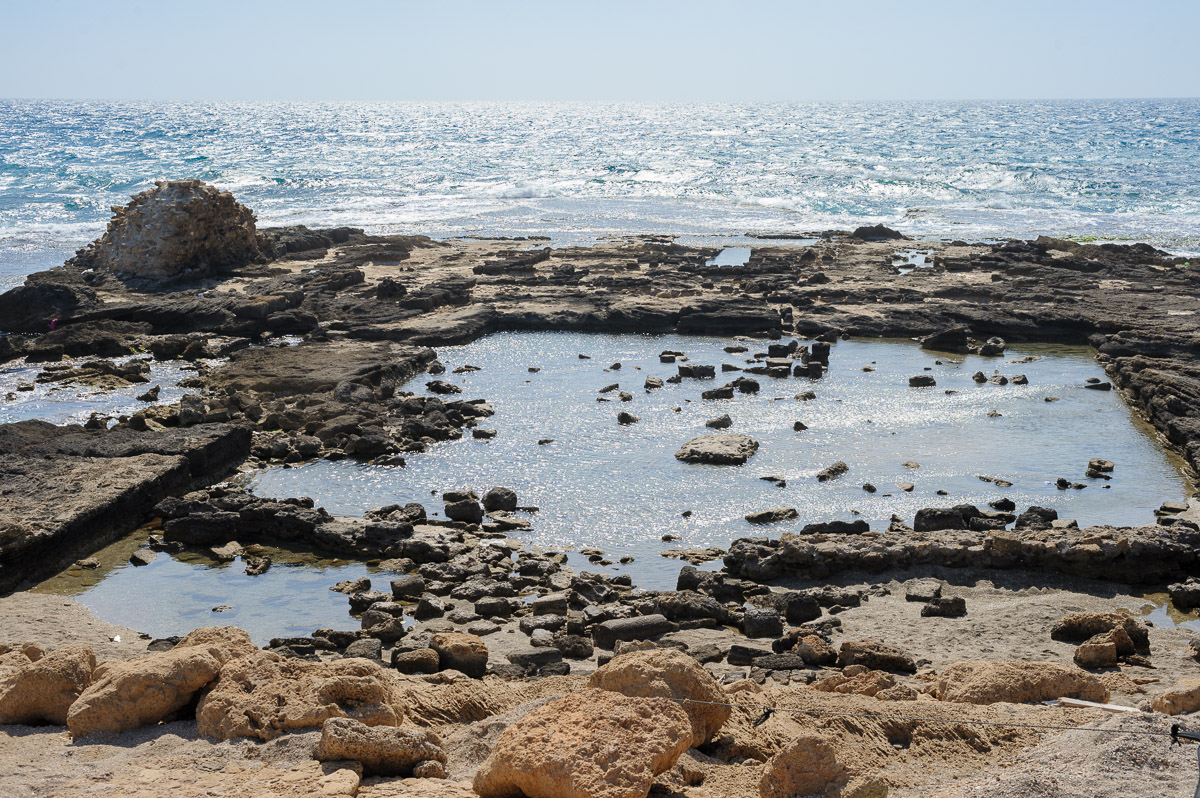 A hippodrome / amphitheater runs from north to south along the seashore. After its expansion it could hold up to 15,000 spectators. At first it served as hippodrome for horse races, later it was rebuilt as an amphitheater. Many Jews captured and enslaved by the Romans during the Great Revolt have lost their lives in gladiator fights right here. 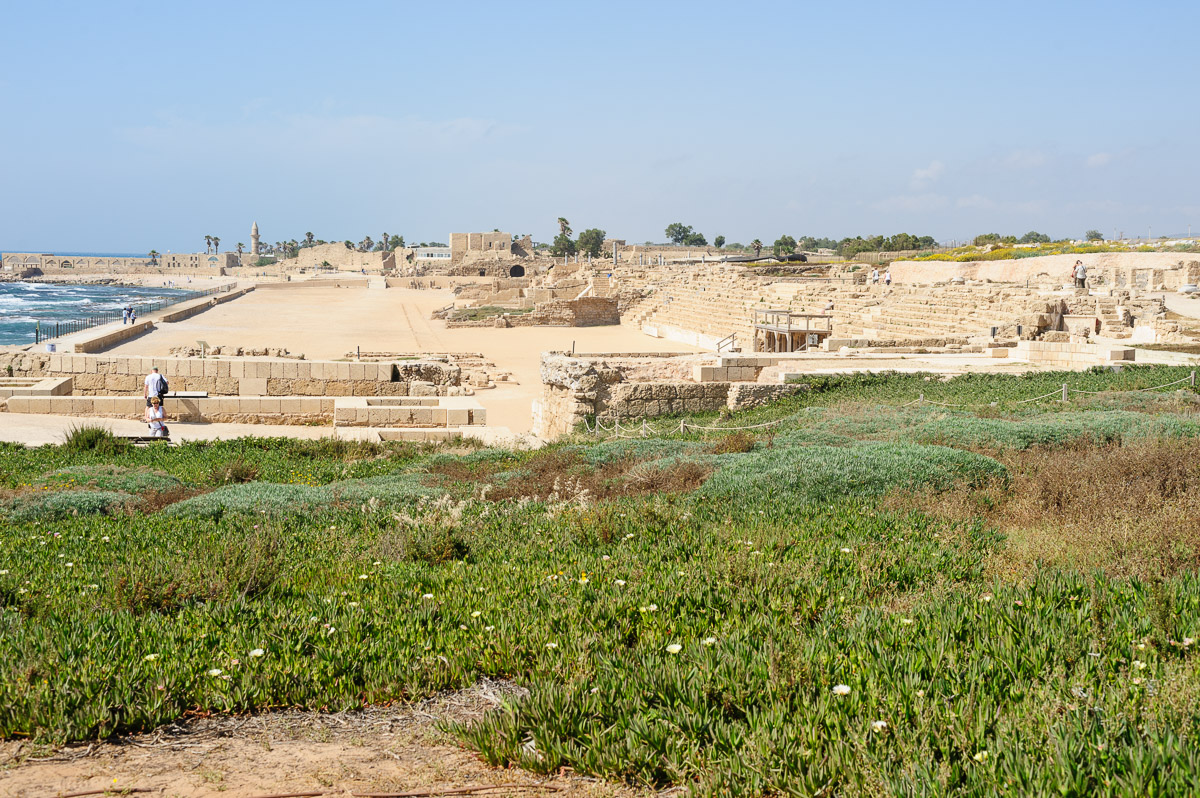 Part of the Roman city has been excavated, with villas, bath-houses, public buildings, warehouses, and latrines. 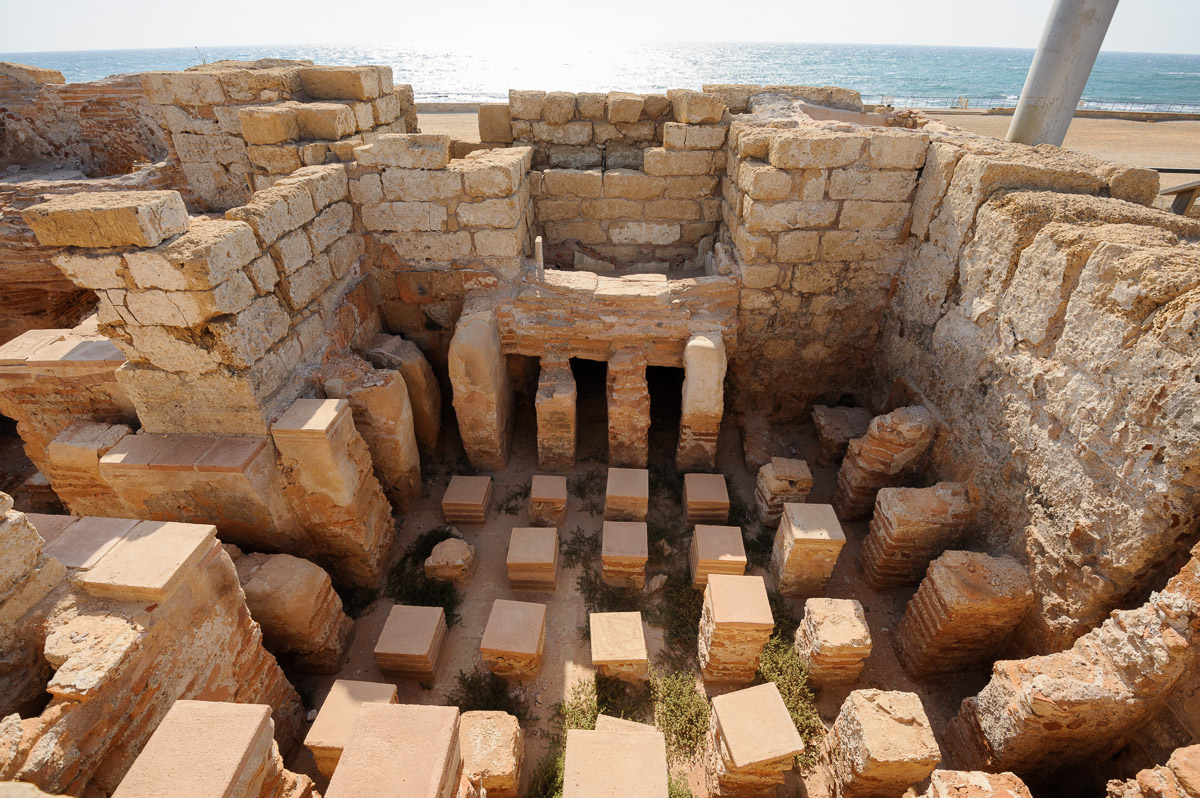 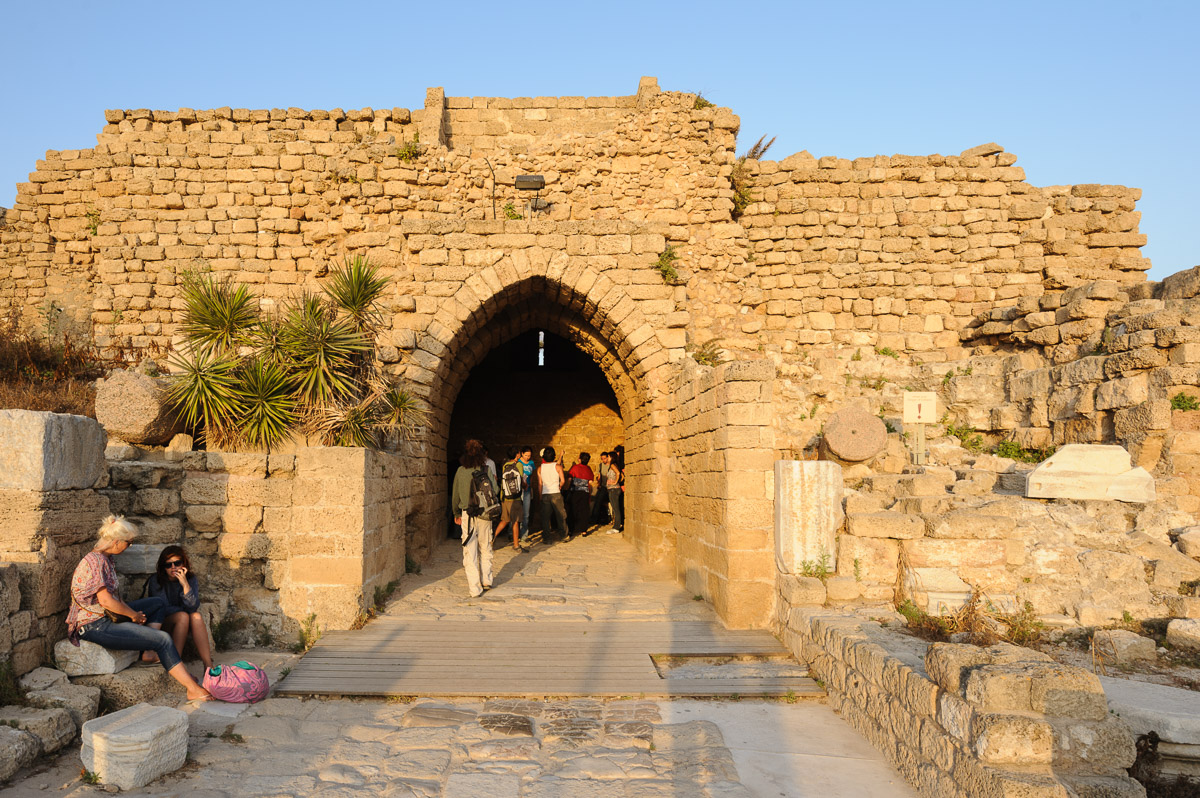 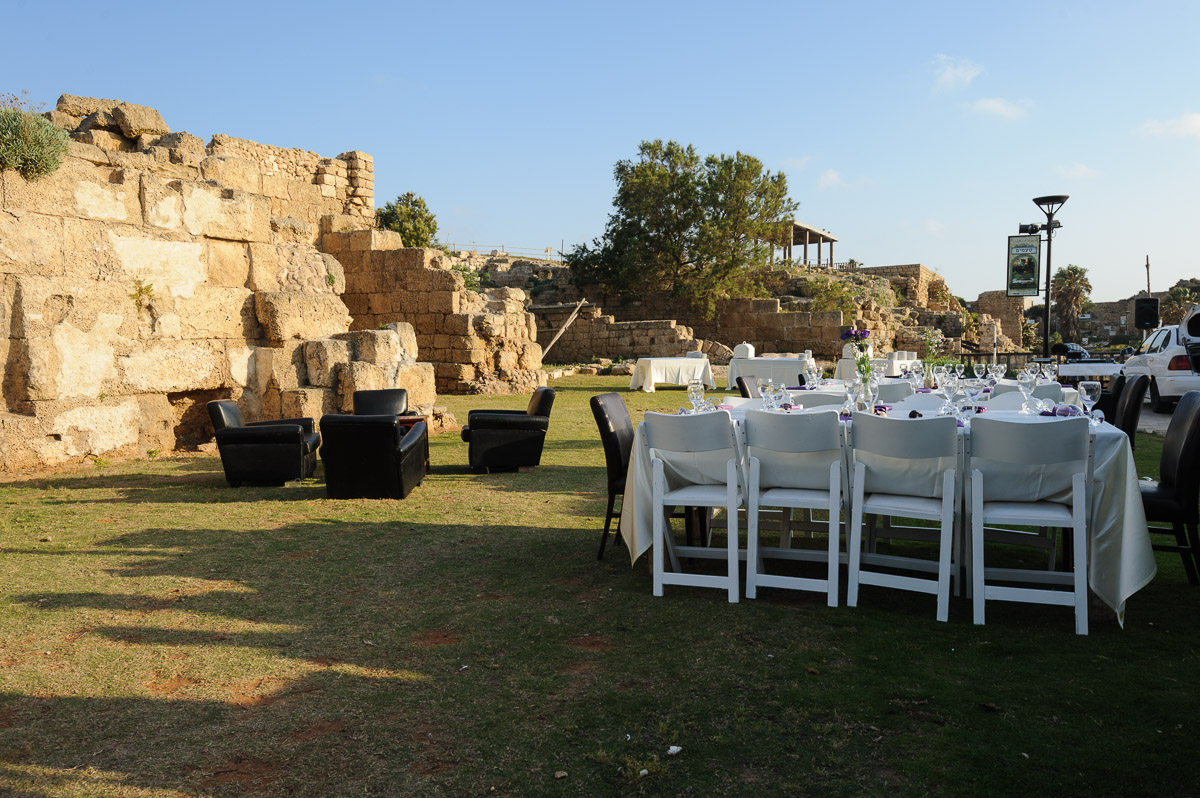 Further north, a short drive away, is the aqueduct that supplied water to the city. With 120,000 inhabitants, Caesarea was once the largest city in Judea, and a sophisticated water supply system was essential. 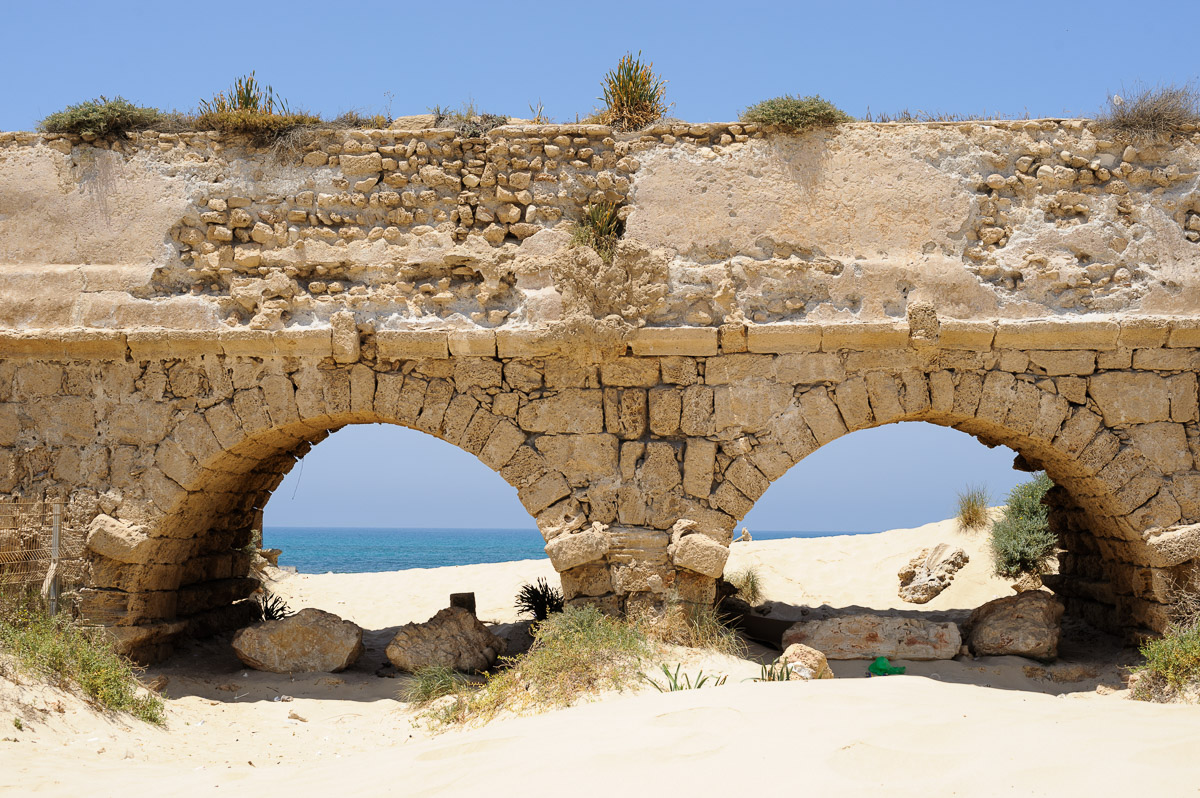