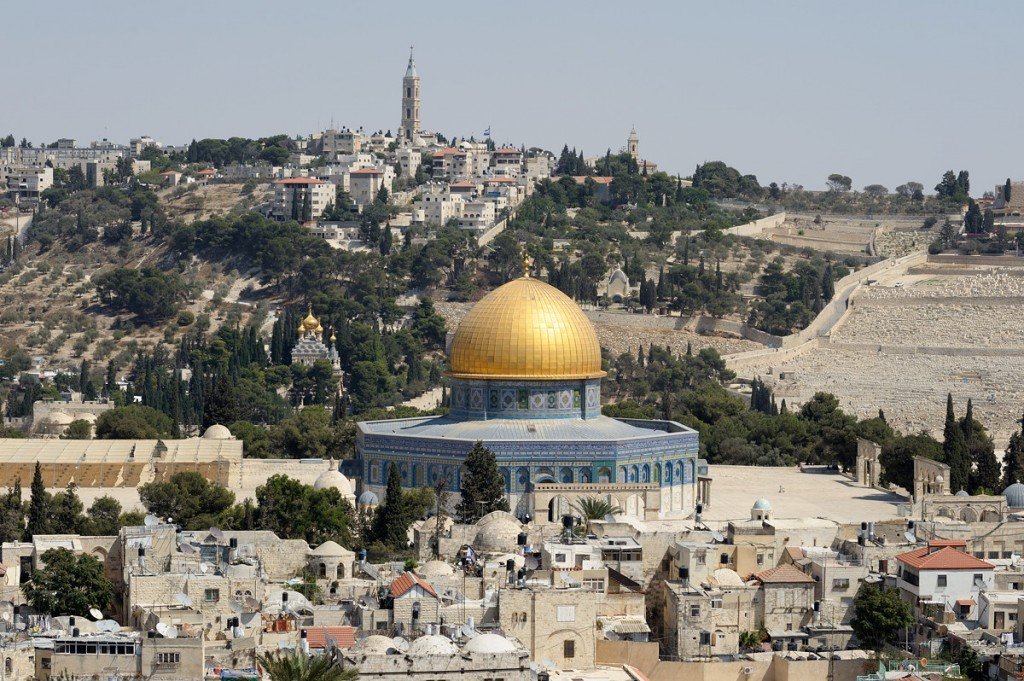 Temple Mount with Dome of the Rock

Jerusalem is first mentioned in the Execration texts of the Egyptian Middle Kingdom around 19th century BCE, and later again in the Amarna letters in the 14th century BCE. With the conquest of David the city turns into a center of religious reverence. Solomon builds the First Temple on Mt. Moriah, at the very spot – according to tradition – where God sent Abraham to sacrifice Isaac.

Four centuries later, on the 9th day of Av (Hebrew calendar), Nebuchadnezar II and his Babylonian army destroy the city and the temple and take the Jews into exile. About 50 years afterwards Cyrus the Great of Persia frees the Jews and permits the rebuilding of the temple, marking the beginning of the Second Temple period. Later Herod would expand the Temple Mount area and reconstruct the temple.

In the year 70 C.E. both Jerusalem and the Second Temple are once again destroyed, this time by the Roman army under Titus. In the following two millennia the city is rebuilt and destroyed several times. The Byzantines succeeded the Romans but lost the city to the Persians, just to regain it a few years later. Eventually the ongoing fight between the Byzantine and the Persian empires weakened both sides and allowed the newly rising Muslim armies to conquer much of the Middle East.

At first the Umayyad dynasty built fancy palaces. But following their demise the new Muslim rulers neglected the city. The decay continued until the arrival of the crusaders, whose architectural marks can still be seen. Once again in Muslim hands, the Mamluks would eventually change the face of the city, building magnificent palaces, tombs, and madrasahs (religious schools). In the 16th century the Ottomans built the city wall surrounding the old city, the one we see today. The Ottomans would rule the country for 400 years until 1917.

During World War I the British took control of the country and later received the mandate for the establishment of a Jewish national home from the League of Nations, predecessor of the United Nations. The 1947-1949 war of independence left the city divided until 1967, when Israel conquered East Jerusalem and the West Bank during the Six Day War. Today Jerusalem is a holy city for Jews, Christians, and Muslims alike.

Depending on your preferences, I can offer tailor-made tours on any of the following subjects: history, archeology, religious sites (Judaism, Christianity, Islam), culture, architectural highlights, crusaders, Mamluk period, Ottoman period, foreign influences, 19th century Jerusalem, War of Independence, Zionism, 1948 to 1967, present day social and political issues (the facts, not opinions), or a blend of the above, to your personal taste. Or let me simply show you some of the many beautiful spots.

Below are a few examples of my Jerusalem city tours:

In the Footsteps of Jesus

(3 day round trip, the 3rd day in Jerusalem can be booked independently)

I’ll be happy to plan an individual tour for you.

For more information and suggestions for your Jerusalem visit, see: