While touring the old city of Jerusalem to capture some images of the snowfall, I found the following banner on the way to the 9th station of the Via Dolorosa, near the Church of the Holy Sepulcher. 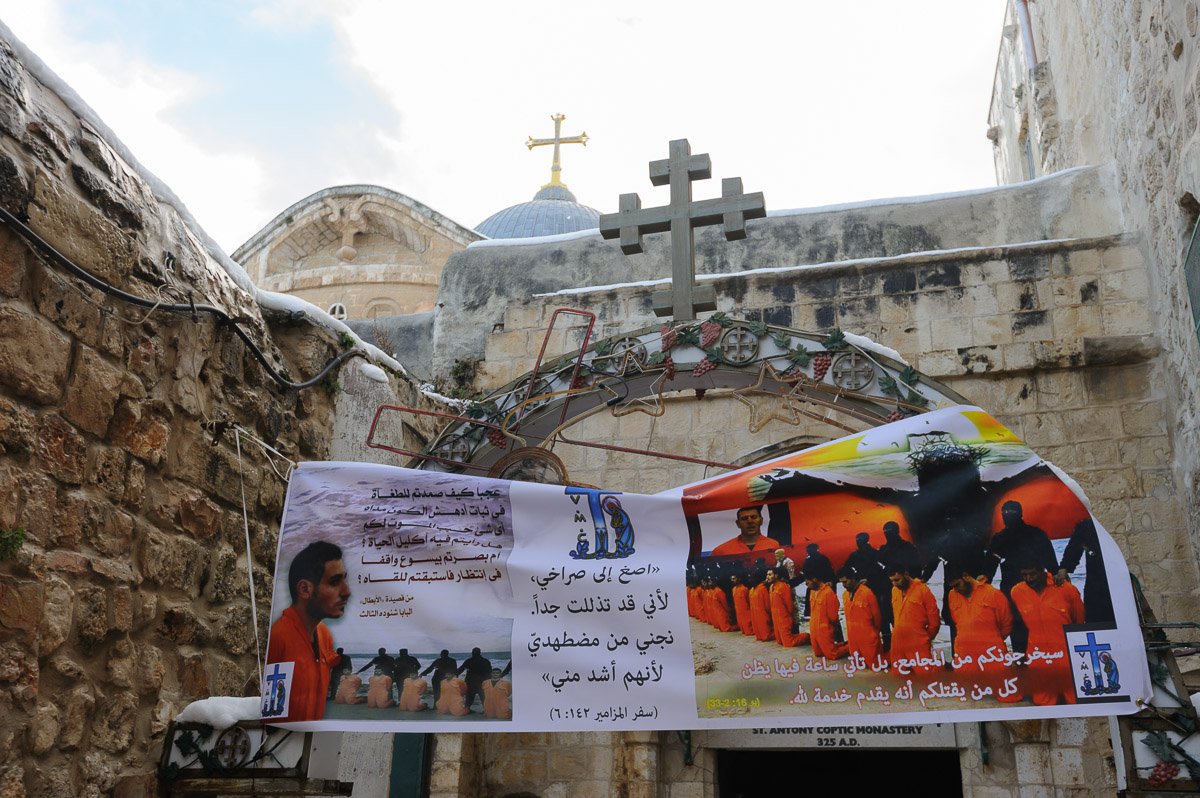 Banner at the 9th station of the Via Dolorosa, near the Church of the Holy Sepulchre

The banner shows photos of captured Christians just before being slaughtered by Muslim extremists associated with the Islamic State.

Once upon a time the Islamic countries have been a haven for Jews who fled the inquisition that raged in Europe. But the dissemination of antisemitic Nazi propaganda in many Arab countries, followed by the establishment of Israel in 1948 and the Arab-Israeli war, triggered widespread persecution and pogroms against Jewish communities. Eventually more than 800,000 Jews fled.

As it seems, Muslim supremacists don’t stop there. After the Jews, Christian and other minority groups are now subject to persecution in many Muslim countries. Following that, or perhaps concurrently, other Muslims fall victim to these murderers, Muslims who do not follow their doctrines. Sounds familiar?

Martin Niemöller, an outspoken foe of Hitler who had been detained in concentration camps for 7 years, said:

First they came for the Socialists, and I did not speak out—
Because I was not a Socialist.

Then they came for the Jews, and I did not speak out—
Because I was not a Jew.

Then they came for me—and there was no one left to speak for me.

Didn’t the world suffer enough under the supremacists? Whatever color, race, or religion they came from?

Standing in the old city of Jerusalem and looking at the banner, it suddenly struck me: Today Israel is probably the only country in the entire Middle East where Christians – and Muslims, Jews, Baha’i, Druze, Ahmadis, etc. – enjoy religious freedom and human rights. As a matter of fact, the Israeli government – whether rightist or leftist or center – is often making great compromises to accommodate the beliefs and sensitivities of its religious communities. For instance shortly after the 1967 conquest of the West Bank, the Israeli government gave the Islamic Waqf authority over the Temple Mount, despite the Jewish heritage of the site. Today Muslims have free entry any day and time and through any gate without going through security controls, whereas non-Muslims have restricted access and undergo tedious security checks. Moreover, only Muslims are allowed to pray on the Temple Mount, and Christians and Jews aren’t even allowed to enter the area carrying a Bible or Torah in their bag.

On the other side, Christians were allowed to return to the Cenacle (“Upper Room” or “room of the Last Supper”) only after the State of Israel had been established. Today the Catholics have administrative control over the site which is owned by the State of Israel. The Baha’i chose Haifa to build their world center and the Universal House of Justice. Of course there are many more examples.

Which leads me to the question: How come Israel not only respects religious freedom, but goes to great lengths to uphold it? It is my opinion that it has to do with the Jewishness of the state of Israel. Jewish belief and doctrines do not include proselytizing among non-Jews. It would be rather absurd for Jews to try to influence the religious views of gentiles. Judaism isn’t in any competition with Islam or Christianity over converts. If I’d had to put Jewish attitude towards non-Jews into a simple phrase, it would be “live and let live”.

But there are more reasons behind religious tolerance than the state’s Jewish character. The first and foremost reason is self-preservation. Israel will not want to antagonize the Muslim populace inside the country nor in its neighboring Arab countries or the Muslim world at large, which counts more than 1.5 billion people. Similarly, Christian concerns have been answered in likewise fashion, as can be seen in Nazareth where the Israeli government and court stopped the construction of a mosque next to the Basilica of the Annunciation (see for example the NYT article of 2002).

It isn’t easy to accommodate different religions, as has been seen in Nazareth. But given the religious significance of Jerusalem and other sites for the three monotheist faiths, Israel has done quite a remarkable job. In any case, I’m glad I live in Israel!